Before dawn on Wednesday May 26th the moon will dip into the Earth’s shadow, marking the start of a total lunar eclipse. The moon will enter the Earth’s outer penumbra shadow at 3:47am. During this phase it’ll be difficult to notice anything.

After 4am, you should begin to see some shading on the moon’s SE (bottom left) side. The shading will darken and spread across the moon until the partial phase begins at 4:44am. At that time the moon will enter the dark core of earth’s shadow.

Unfortunately, the moon will set in the partial phase for Arkansas around 6am, a mere 10 minutes before totality occurs. However, totality marks the time when the moon is exactly opposite the sun. Thus as the moon goes down, look to the east to watch the sun come up.

This is also the closest full moon of the year, making this a supermoon, and it is known as the Flower Moon.

Our next lunar eclipse will also be an early morning eclipse, however, we’ll be able to see the full eclipse.

Mid-May brings a rare opportunity to see all of the planets of the inner solar system in the evening sky. To see them you’ll need a clear, low WNW horizon.

Highest in the sky is Mars. Mars has been a fixture in the evening sky for several months, however it is growing dimmer as Earth is continually speeding ahead in our faster orbit. Mars is now on the far side of the sun and getting farther away with each passing day.

Next is elusive Mercury. As the closest planet it never gets very far from the sun. Mercury will only be easily visible during mid-month. It reaches its greatest separation from the sun on the 17th and then begins to step closer to the setting sun each evening.

Venus is closest to the horizon. It too is on the far side of the sun, but night by night it is slowly stepping away and getting brighter. By late summer, it’ll be our brilliant evening star.

Last, but not least, Earth. To see it you’ll just have to look down!!!

This Friday, March 26th, the planet Venus passes behind the Sun as seen from Earth. This also marks the point that Venus passes from the morning sky back into the evening sky. While it’ll take a few weeks, begin looking for the ‘evening star’, low in the WNW at the end of April or early May.

While we can’t see this from Earth, you can watch Venus pass behind the Sun through the eyes of the SOHO spacecraft at:
https://sohowww.nascom.nasa.gov/data/realtime/c2/512/ 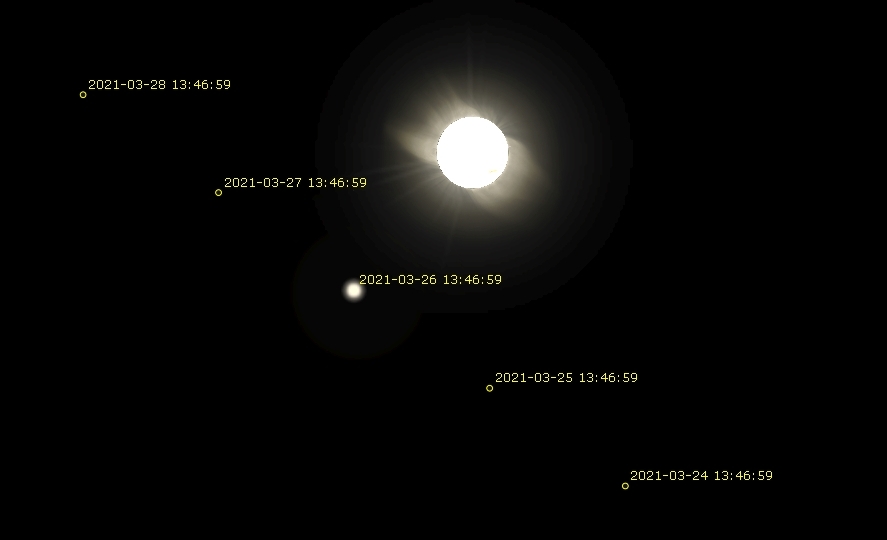